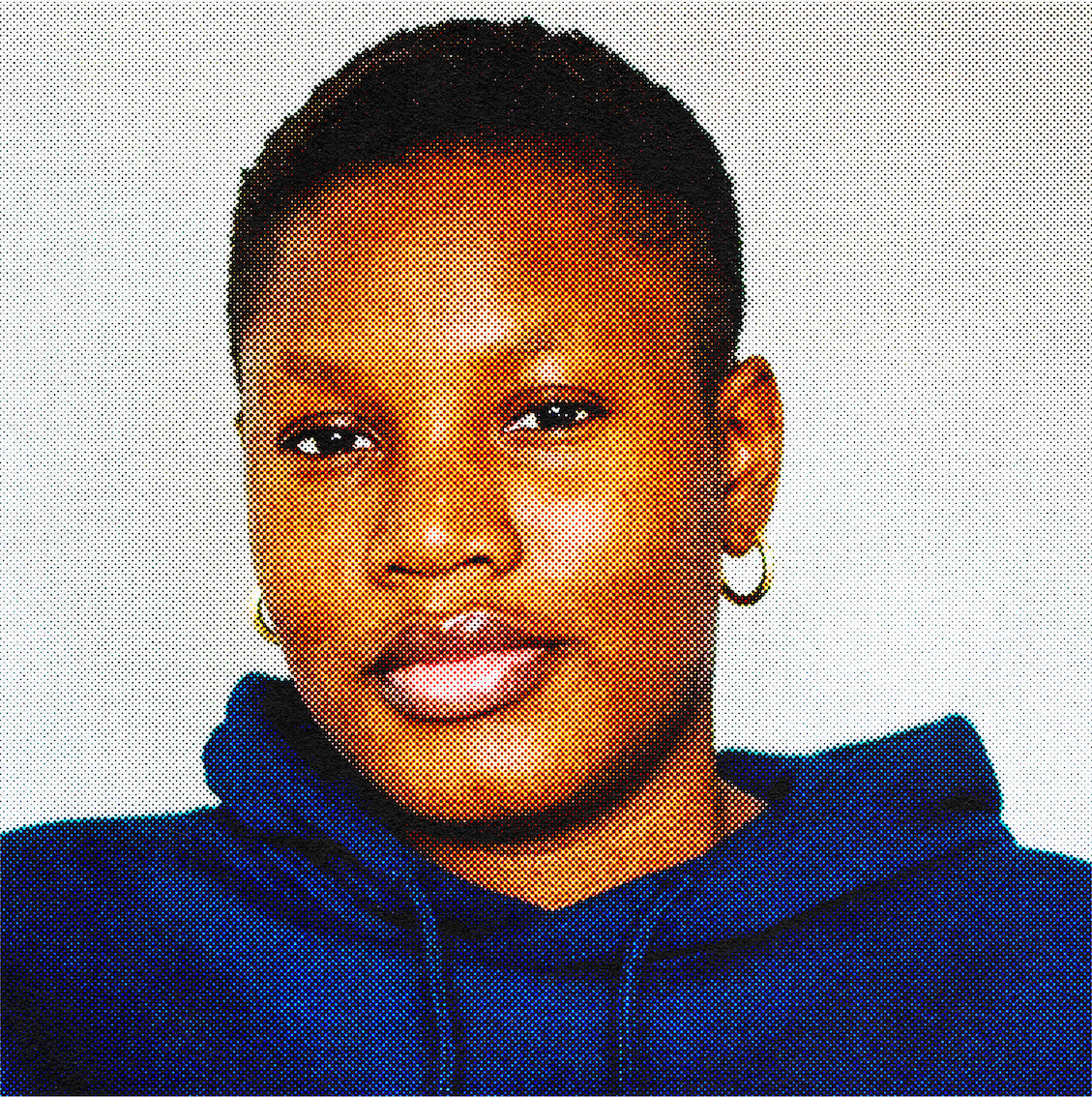 Adiba Maduegbuna is our tech hero, Black Discourse site builder, advocate for Black women in tech, DJ - and last but not least, the founder of Anim Sessions, a creative tech consultancy creating web and mobile apps, and augmented reality experiences.

Originally from Lagos, Nigeria - she’s now based in London. We caught up with Adiba to pick her brain about everything from NFTs to End SARS and cutting her teeth building Ashanti fan sites at 8 years old.

Tell us about Anim Sessions.

I founded Anim Sessions in 2018 and it really started as a passion project. I was exploring ways to combine both of my interests (music and tech). So I started connecting with other music nerds and participating in hackathons and events across Europe (SXSW, Sonar, MTF hacks).

People found my blog posts intriguing and wanted to pick my brain on different topics within tech and then I started consulting on projects and executing their ideas (websites, apps, Instagram filters, tech management at festivals). It’s been a pretty organic combination of coding and creativity, and I love playing with tech and building stuff for others.

I mean, you just casually drop words like apps and tech, but what does that entail?

I’m an engineer and problem solver. I build mobile apps and websites. The first mobile app I built was for a music analytics company which later got acquired by Apple. I did this as an intern, final year uni student and had a lot of fun.

So when I left uni I pursued a career in the mobile industry working with some larger companies like ASOS. I’ve also worked in the healthcare industry building apps to help people stop smoking and manage their menstrual cycles with the help of behavioural data.

Websites have always been a part of my journey in tech. I started building these at eight or so making fan sites for some of my favourite artists like a B2K Fan site and some other ones for 2000s artists like Ashanti and Ciara lol.

So at the time we had a family computer and it was one of those dial up ones. If someone was on the phone you couldn’t be on the net at the same time.

I’d be on the computer all the time and my brothers hated it. I’d spend hours browsing, playing games and downloading music from limewire. Limewire was the place to be!

I also downloaded a cracked version of Fruity Loops, and tried to make beats. Then I got curious about games and sites and I dived into the world of HTML and CSS.

So for most people, the concept of coding just sounds so foreign. It's completely off limits. But you previously had a project that was encouraging Black women to get into tech, right?

Yeah, I've worked with a lot of Black women & women in tech organisations over my career. The one you're talking about was called Witty Careers.

It was specifically focused on mentoring Black women in London to learn about the tech industry. I worked with a really amazing team. Shout out to Simi (the founder), Bunmi, Manitou, Ola, Dolapo.

And just, as you said, people think that coding is off limits. The project was about presenting that to Black women and saying, 'hey, come learn about all the roles the industry has to offer.

I'm excited about Black digital artists exploring the world of NFT's (Non Fungible Tokens) & The Blockchain. Ownership is important, so exploring non-conventional methods is a great step even if it’s unclear how that looks in the future.

I'm also really passionate about the Nigerian and Ghanian tech wave and how that's creating lots of opportunities for young people. Whenever I’m home I connect with people at co-working spaces and also via Twitter.

There's a lot of investment floating around and a mix of companies solving key problems across different sectors e.g PayStack, Cowrywise, Stears. Spaces are also opening up to explore new ideas, like Tech Cabal.

People are also using tech platforms (Instagram / Twitter) as a tool to amplify their voices like the #EndSARS movement which had Queer Nigerians at the forefront as well as the The Feminist Coalition.

You mentioned that queer Nigerians were really at the forefront of the End SARS movement, which is something that's often erased. And in most cases, queer people and Black women’s involvement in uprisings and resistance is erased.

I wouldn't really say it's like a ‘Black internet’ or a ‘queer internet’. People take initiative, organise and build the spaces that are inclusive of them.

For example, I was part of a really, really, cool team and festival around 2019 called Afro Tech Fest. The team was a mix of 100% Black and Black queer womxn and went really well. It’s as simple as organic connections being amplified by social tools.

For example, Twitter is an easy place to connect with people. Queer Nigerians can easily make connections with the diaspora through conversations, podcasts, films and so on. I think it will grow over time.

So you spoke about ownership and NFT's and I know that it's a hot topic right now, but I think the majority of people are like, 'WTF is it and what's going on?' Why is there a meme that's sold for crazy amounts of money?

I think it's like with anything that is new that people are hopping on, it's really important to kind of be part of that, because who knows where that leads to.

To me, it honestly doesn't really make sense to buy a meme, but someone will. The Charlie Bit My Finger NFT sold for £500,000. This is all backed by the blockchain.

It opens up the potential to explore bigger solutions  like rights management, direct fan connections without exploitative systems, transparency to an extent. I’m particularly intrigued by the dope stuff these visual creatives and pioneers (e.g Lady Phoenix) are sharing with the world. It’s refreshing to see!

And so I think that NFTs and that world allow people to explore different alternatives to ownership.

You don't necessarily have to upload your music, or upload your art, to a platform that kind of tells you how to monetize that. You have the freedom to explore whatever you want to do.

And so I think that that's really important for Black artists.

Yeah, I mean, we saw Azealia Banks sold her art / audio sex tape for a lot of money. As a one off. As a foundation would you say that this is egalitarian software or is it a capitalist software?

Everything has got a hint of capitalism in it. But I think with that, it's more about her saying, you know, this is what this art is worth. And putting that on a platform and people are willing to pay, you know, X amount for it.

Every time people are being told, ‘This is your price. This is your price, take it or leave it.’ But now you put your stuff on a platform and other people can collectively try and bid a higher price for your work as an artist. Like now you go for a commission and someone would be like, 'Okay, we've got like, £300', but in reality, you're worth way more than that.

Augmented reality is all about using tech to enhance your real world with information. Phones are the gateway to that. People use AR everyday and don’t know it, big platforms like Instagram & Snapchat have AR built in but they are marketed as Filters. It sounds much nicer, ooh instagram filters.

Tell us about your DJ work and how this fits in with AR?

I've always just had a natural ear for music and DJing is the way that I contribute to music.

During lockdown lots of DJs were doing live streams and I wanted to bring AR and Djing together. I did a bit of social research in lockdown and  spotted that people would always upload a photo of them watching a livestream e.g dancing.

So I applied for a grant for ANIM Sessions and we got some funding to build a unique online party called, Immersive Afrobeats ( Vol 1 and Vol2).

‍
The idea was simple, a Twitch livestream with me DJing & attendees could also join the livestream by using an Instagram filter.

The filters were designed to fit the theme of Afro beats representing different countries in the African diaspora. Also having the theme of space and isolation, and people on ships, and on spaceships and that kind of thing.

Adiba Maduegbuna is a developer, creative technologist and DJ. Her work spans across a career working at some of the world's biggest corporations and startups within music, fashion and healthcare. Most recently, she founded ANIM Sessions, a creative tech consultancy which applies web, mobile and immersive technologies to launch innovative ideas. She enjoys writing code in Kotlin, public speaking and blogging about music and tech in her spare time. She's a Lagos to London transplant and enjoys travelling.