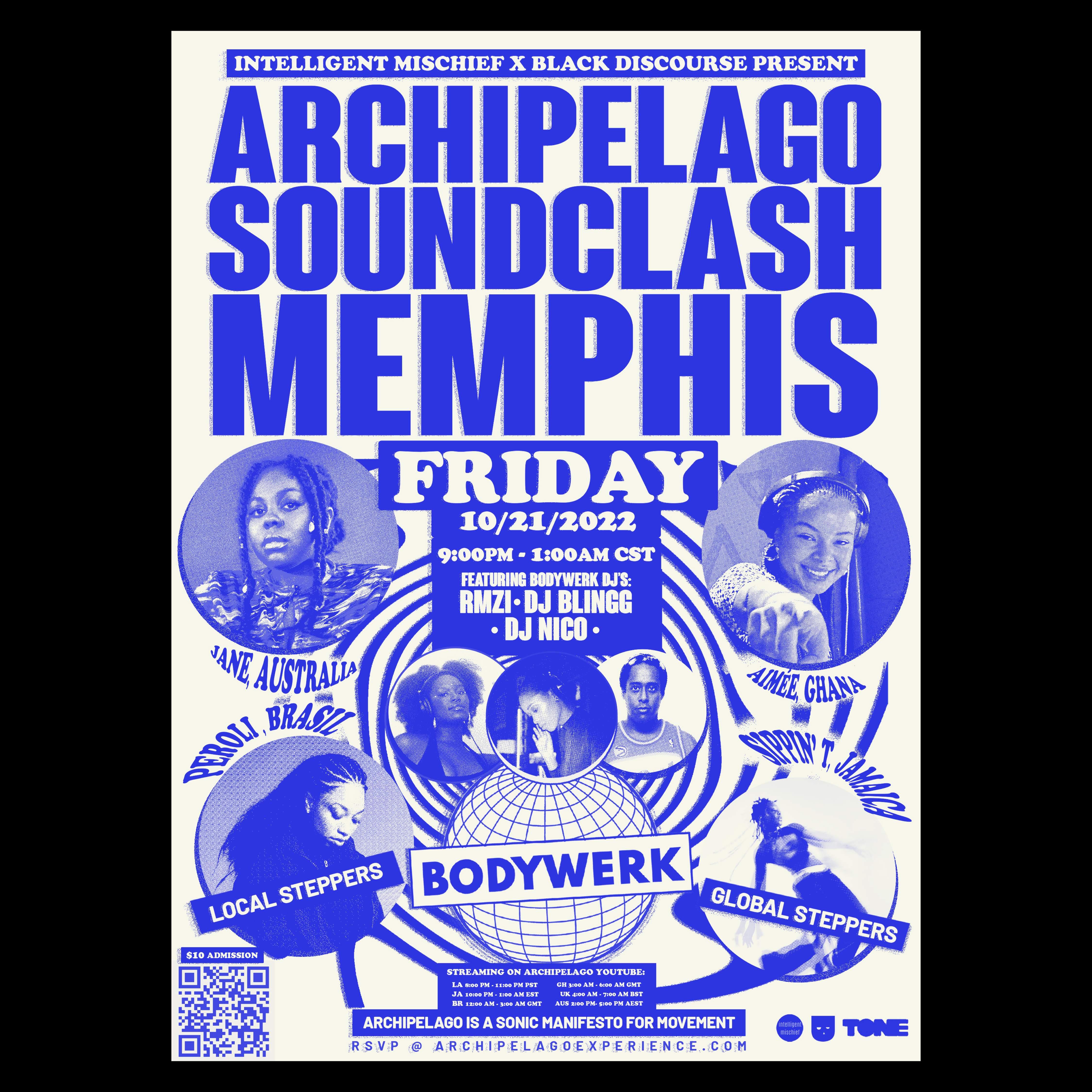 In October 2022, Intelligent Mischief and BLACK DISCOURSE launched the first in a series of global live streamed soundclashes in Memphis - to shine a disco ball light on the perpetual issues that Black migrants face around the world.

ARCHIPELAGO is a newly launched roaming Afrofuturist experience that celebrates African diasporic movement and migration, conceived by Intelligent Mischief. BLACK DISCOURSE was invited to curate a global sound clash to sonically unite the Black diaspora on one dance floor under no nation as part of a three day immersive experience.

The BLACK DISCOURSE team co-created a manifesto to weave each global DJ set together through a common narrative of interdependence, and autonomy. As each DJ battled for the champion set they were also blasting the ARCHIPELAGO manifesto of global unity.

Listen to the Archipelago Manifesto:

The Afrofuturist experience continued over the next two days with a curated schedule of cultural activations in which guests were able to dream and play in an immersive space. The three-day experience invited guests to move through multiple rooms (portals) – immersed in image collages, projections and sonic disruptions – located in Memphis to a futuristic maroon society activated by Afro-diasporic dreaming and the unifying language of drums, bass and dance.

Parties have long been used as tools for organizing and activism within the Black community. ARCHIPELAGO is joining the long history of party activists by using the DJ booth as a political platform to speak out against imperialist border creation and the inhumane treatment of migrants.

Additionally, BLACK DISCOURSE and BODY WERK produced over three hours of visual media collaging found footage of African and diasporic dancers and trippy acid treated African landscapes, transmitting sonic and visual archives of the brilliance of Black movement. These visualizers played as a visual meditation for the party guests and the global streaming community.

Intelligent Mischief chose Memphis to be the premiere location for the event because of its historic role in Black liberation history and sonic culture as the home of one of the first free Black communities in the South and the birthplace of the Blues, Soul and Rock & Roll. Black owned gallery, Tone Memphis - was an organic partner for this radical event.

The experience was supported by Race Forward and the Memphis premiere will serve as a proof of concept for an ongoing mobile Afro-futurist immersive experience and streaming radio channel with similarities to Boiler Room, Meow Wolf, and Artrechouse.